The weather changed this week. Having enjoyed an Indian Summer earlier in the month, much-needed rain began to fall. This week is forecast to be showery with some heavy rain. Thunder and lightning keep featuring in the forecast for a few days ahead, but then disappearing nearer the time. Electrical storms are fairly uncommon where we live.

Last week our usual routine changed with visitors for 3 days. Enjoyable walks in the local area with them used up some of my regular writing time. After they had gone home I spent a lazy weekend reading a book a day as well as getting out in the fresh air for a walk and to attend a church service.

This week two mornings have been given up to gardening – one to visit a garden centre and the second to plant the pansies and violas purchased the day before.

The reservoirs in this county are very low at present. The rain will help to refill them. It was surprising how high the water-level in the nearest beck had risen after a day and night of heavy rain. Previously it was at the lowest level I can remember.

I have recently been reading a book on my phone using BorrowBox. I found it interesting, but there was rather more technical detail than I required as a non-medical person. After renewing it twice and accidentally losing my place by an over-enthusiastic session of cached data-clearing, I have decided not to finish it. Had it been a physical book I might have flicked through to see whether there was anything else of interest in it.

The book was The Changing Mind: A neuroscientist’s guide to ageing well by Daniel Levitin. I found much of the early part interesting especially the references to music – the author is a musician as well as a scientist. It is really too long to read on a phone, so I am abandoning it.

Thank you for dropping by. Normal service will be resumed soon!

Last Saturday I decided at the last minute that I would go to the writing group I joined in 2014.  I had wondered whether it was worth the effort.  We meet in alternate months.  I checked the weather forecast and it was going to be warmer by 1°C and sunnier than here.

Last time I went I made notes in a small notebook on the outward journey and later used them to write a poem.  This time I realised I only had my diary and a posh notebook with me.  I noted down the birds I saw on a spare page in my diary.

The notebooks I mentioned

It was high tide.  There was a large group of cormorants, which I was not quick enough to snap.  Later a group of birds on the shore included cormorants, oyster catchers and gulls.  They looked to have sorted themselves out into breeds!

Some of the berries I had noticed in November were still on the bushes.  This time I didn’t see any herons.

I took a few photos from the window of the train, having in mind the Daily Post photo challenge – Optimistic.  I was optimistic travelling and even more optimistic taking photos through the dirty windows of a moving train!

There were many people travelling to a football match.  The platforms looked busy, but the train did not become too crowded, although it was only two coaches.

Some of my photos may be seen on Sue’s words and pictures.  I also took a photo from the Castle View Restaurant in a department store, where I ate a sandwich and drank tea.

Can you see the castle?

As well as travelling on the train I also have to catch a bus to reach the house where we meet.  I was eating a bar of chocolate as I boarded it.  Then I remembered that bus companies do not allow eating or drinking.  I hastily hid it in my bag, without thinking of the consequences.  (The following day I emptied my bag and had to clean away crumbs of chocolate.)

The meeting was enjoyable and interesting.  Our homework had been to write about red sky.  One person had written a children’s book and illustrated it.  We had at least two poems written by members and several pieces of prose.  We heard about South Africa, India and Switzerland as well as Bible lands.   We also talked about books we had read.

On my way to catch the bus home I was treated to a murmuration of starlings, which I saw twice in the sky above the busy road.  It was dark by the time I reached the station, which sounded like a roost for birds.  I did see one pigeon on a platform.

Some of the passengers had been to the match and were discussing it and the wider politics of football.

My walk home from the station was in pouring rain.

Three days later part of the railway line I had travelled on was closed due to a landslide in a storm.  It reopened in a couple of days.  It is easy to take the infrastructure for granted. The mechanical diggers that we have today make work easier than when the railways were constructed.  Even so people have to work in all weathers (and at night) to repair and maintain the railways, roads and power lines.

Every cloud has a silver lining is a proverb or saying.  My other blog is full of them!  Rarasaur’s prompt for the promptless asks uninspired bloggers (and those with time on their hands) to respond to her prompt about a silver lining.

Sometimes when the weather is dull people feel miserable, but cheer up again when the sun comes out.  The silver lining of a cloud might even be visible around the edges at this stage in the changing weather. 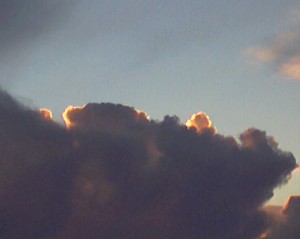 Sometimes when life seems bleak it is a good idea to look for the little things which stop everything seeming hopeless.  In other words we should count our blessings.

Today I published my 100th post on my other blog.  I did not make a song and dance about it.  I have been marking every fortieth post with a summary, so I have another twenty posts to go before I am due to tell the world I have reached another milestone.  I just quietly published it, realised I had forgotten to put in a link, but I had switched my computer off, went out, came home, had lunch, switched my computer back on and found that for the first time ever (to my knowledge) my post had been reblogged.  I have a copyright and disclaimer page which specifically states no reblogging without permission, but who reads the small print when there are so many interesting things to read?  Anyhow I checked out the website where my post had been reblogged and anyone interested in reading the whole post has to click through to mine.  I added the link I had forgotten earlier and rescued the comment from my spam folder notifying everyone who finds my post of the reblogging.

So, thanks for the reblog, Adithya Entertainment.  I had a few moments of anxiety and, “Do I need to do anything about this?” But it seems to be a case of “All’s well that ends well”, which must be a silver lining itself.