Apart from reading extra blog posts during the Blogging from A to Z in April Challenge I also finished reading five books. Regular readers of this blog may be glad to see that normal service has now resumed with hopefully one post a week.

Dethroning Mammon: Making Money Serve Grace by Justin Welby, the Archbishop of Canterbury is particularly suitable for reading during Lent. I began reading it in March and finished it before Easter. I found it interesting, but not altogether what I expected. I have recently heard of a similar book by John Ortberg, which perhaps concentrates more on things than money. It would be interesting to compare the two books. It would also be interesting to look at Dethroning Mammon with a group of people. Reading it while resting after lunch did not help my concentration!

I bought The Old Ways a journey on foot by Robert Macfarlane at Wordsworth House. It is part of a trilogy, but can be read on its own. I had not read the earlier books, but thoroughly enjoyed this one. I had walked part of some of the long distance footpaths mentioned at various times, which added to my interest.

Birdsong by Sebastian Faulks is a novel set during the Great War of 1914 to 1918, but with some detective work done by a more recent character in the story. It is a very gory book. The plot has variations in pace and all the loose ends are satisfactorily tied up. I enjoyed reading a second-hand paperback copy.

The Book Thief by Markus Zusak is an unusual novel having Death as the narrator. It is set in Germany during the time of the Nazis. There are two short books within the book. I had been warned about the language (profanity) in the book, but did not find it was a problem. There are many more important ideas expressed through the telling of this story. Another second-hand paperback I bought.

Waterlog by Roger Deakin is a book which I discovered in hubby’s ‘to read’ pile. It is one of the books featured in Landmarks by Robert Macfarlane. Roger Deakin recorded his experiences during a year or so, when he went “wild swimming” all over the British Isles. He made many literary references.  This book prompted me to try again to read Tarka the Otter by Henry Williamson, which I struggled to read it in my teens and gave up. That may require a post to itself. In any case I read it in May!  Waterlog had a great deal about East Anglia, a part of the UK I have hardly visited. However there were other places with which I am more familiar, not least Tooting Bec lido, where I swam a few times in my childhood. It is a well-written book, showing keen observational skills.

So in April I read five books, all of which I recommend.

In a previous post I wrote about three books I read in November.  I also mentioned some library books I had borrowed.  These were War Horse by Michael Morpurgo, which I spotted as I took a detour through the children’s section on my way to the grown ups’ one.  It had been put on display for Remembrance.  Michael Morpurgo writes brilliantly.  I decided that as it was already well into November it was unlikely that I was depriving a young person of this book.  In any case I returned it quickly.  It is told from the view point of a horse (as is Anna Sewell’s Black Beauty), but to my mind War Horse is better.  It is set in Britain and Europe during World War II.  That is as much as I am going to write about the plot.  Perhaps you have read it or seen the film.  (I am not a regular movie-goer.)  I recommend this book.  It moved me to tears.

The next book I read in the section for local interest books.  It was a self-published book produced around 20 years ago.  At first I struggled with the font and the lack of editing in the early chapters.  However the author had put a story together with a lot of interesting background information about places I have visited.  Most of the history was told as dialogue by various characters without distinctive voices.  Of the two main characters only the story of one reached a conclusion.  What the other would decide to do was left as a question mark.  The book is illustrated with line drawings.  It is set during the Wars of the Roses.  At least the author has a few books to her name, which is more than I have!  Her other books are humorous farming tales, which do not appeal to me.

The third library book was where my heart used to beat by Sebastian Faulks.  I wondered at the beginning, whether this was a book I really wanted to read.  However I continued and found that it was a fascinating book, dealing with some interesting ideas about treatments for mental illnesses.  I read another book by Sebastian Faulks several years ago – Human Traces, which explores similar issues in another work of fiction.

All the books I finished reading in July were available from various branches of the county library to which I belong.

A Possible Life by Sebastian Faulks

This book could not be less like the book I read by Sebastian Faulks in June.  He is a very versatile writer. The book is in five sections, which are connected by tenuous threads. The reader needs to pay close attention.

The High Mountains of Portugal by Yann Martell 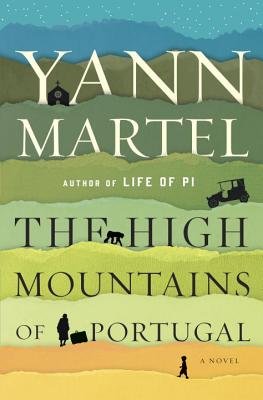 This book was chosen by a family member.  Surprisingly its structure was not unlike that of the book I read immediately before it.  In this case there were three parts, which were more closely related. Yann Martell wrote The Life of Pi, which I read in March 2007.  The author is exceptionally imaginative and either draws readers into the world his characters inhabit or alienates them completely.  I continued reading both books to the end, being fascinated.

The next three books I read in quick succession are by one of my favourite authors, Jasper Fforde.  They are The Last Dragonslayer, The Song of the Quarkbeast and The Eye of Zoltar.

These three books were shelved in the junior section of the library.  The third one is marked as teenage.  I advised a friend against introducing her preteen son to them just yet. There is so much in the background, that would go over the heads of younger readers.  Subatomic physics and high finance are woven into the plots.  I had been looking for these books in the library for years.  Circumstances allowed me to borrow the whole series almost simultaneously.  (The loan period for books 1 and 3 overlapped with that for book 2 from a different branch.)  I am waiting in eager anticipation of the publication of Jasper Fforde’s next book, which is a sequel to my favourite of his books.  (I was disappointed to realise that I have read them all, although not always in the correct order.)  Shades of Grey is my favourite so far, followed closely by The Eye of Zoltar.  The next book is due out later this year.  I also learned from Jasper Fforde’s Twitter that The Last Dragonslayer is being filmed for SKY and due to be shown at Christmas 2016.

The Return Journey by Maeve Binchy was the second book by this author, which did not come up to the standard I expect.  It is a book of short stories (as was the other, published posthumously.)  I have to admit that I prefer novels to short stories.  In a way reading short stories is like reading a whole batch of first chapters in a row.  As soon as the scene is set, the story is half over.  These stories had been written at different times and collected together.  It struck me that the world in which we live today is far more dangerous than the world of the 1980s, for example.  In my opinion only two of the stories were worth reading.