I have read four books this month.  Three of them were on sale at a writers’ retreat. The fourth was a gift from a friend. I wonder whether you can work out which one that was!

Destiny’s Revenge is the second in a new series for young adults by Philip S. Davies. I have already posted a review on Sue’s considered trifles. I am looking forward to reading the third book, when it is published.

A Scargill Poetry Anthology by Helen Brocklehurst is only available from Scargill Movement as far as I know. It is a delightful booklet of poems mostly inspired by community life. I was fortunate to hear Helen read one of them.

The Gift of Peace by Anne Rogers is an inspirational book published by The Leprosy Mission. It is a book of beautiful photos overprinted with quotations and inspirational messages. A book to dip into from a charity worth supporting. 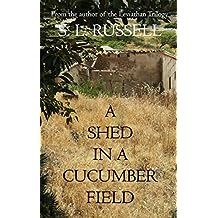 A Shed in a Cucumber Field by S. L. Russell is a novel about two sisters, who have not seen each other for twenty eight years. I wondered how similar it would be to Rainy Day Sisters by Kate Hewitt. This book is a more serious read. The back story is revealed a bit at a time in dated chunks about the sisters and a third character. Strangely there is also a similar incident in it to one in the back story of the fiddler in The Fiddler’s Leg by Ann Lingard. The title is a phrase from the Bible (Isaiah 1:8). I found it difficult to put this book down.