I have written before about some time I spent in Kent in the summers of 2014 and 2015.  The first time I stayed at Burrswood coincided with a flower festival.  I took a photo in less than ideal light just before leaving mid-morning. 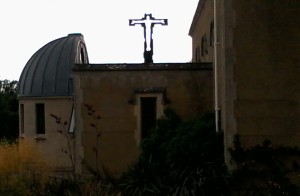 The Breakthrough Cross is a piece of sculpture dating from 1966, which was made for Burrswood.  The person who made it was (Joan) Ophelia Gordon Bell.  Until I read her name on a card from Burrswood I had not heard of her.  Out of interest I looked her up on Wikipedia.  She was married to a well-known artist and lived in Cumbria.

In this age of mobile populations it is hardly surprising that some people from Kent move to Cumbria and some from Cumbria live in Kent.  Less surprising that artists and sculptors have work in far-flung locations.

Another place in Kent I have visited a few times in recent years is Bromley, which has a good shopping centre.  Last time I went (in October) I became aware of a heritage trail, which explored the town’s past.  Some famous people have lived there.  I cannot think of an obvious connection between HG Wells (an author, whose books I devoured in my teens) and Cumbria.  Nor between Charles Darwin and Cumbria.  However Wikipedia alerted me to the fact that a clergyman at a church in Bromley became the Bishop of Rochester (in Kent) before becoming Bishop of Carlisle (in Cumbria) in 1972 (until 1989).

A quick piece of detective work on Wikipedia (looking at the derivation of place names) leads me to believe that the connection between the name of the county and the name of the river could be that early residents of both areas were Celts.  Kent possibly means bright in an early language.  If I am not mistaken the name Kendal is a contraction of Kent-dale,  the valley of the river Kent.  Now, what have I heard about Wikipedia and newspapers, I will pass on to you – don’t believe everything you read!

If you’d like to see more of my pictures of Kent and Cumbria, please visit Sue’s words and pictures.