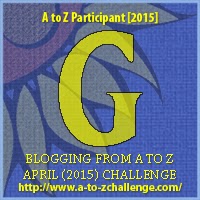 Giver of Life is a name of God.  He gives life in the sense that all living things were made by him.  (My post for C is about God as Creator.)  He also gives spiritual or eternal life.  This is not something, which happens only after we die (as in life after death), but something, which begins in this life and continues after death.

God is used as a name.  Many prayers begin, “O God” or “O God, our heavenly Father” or “O God” followed by a description of who God is or what He has done.  Examples of these prayers may be found in the Book of Common Prayer or in more modern language in Common Worship.  They are known as collects and one is set for each Sunday and Holy Day in the Christian year.

Great is a word, which has become popular.  God is truly great.  A favourite hymn begins

Great is thy faithfulness, O God our Father, 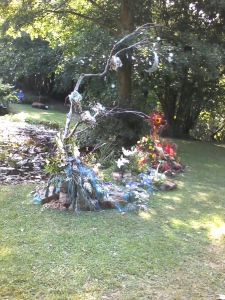 Great is thy faithfulness

I have mentioned this hymn in a post about a flower festival I was fortunate to be present at last summer.

In case you haven’t time to click I am posting the photo again with another showing details of God’s provision at harvest time.

Detail from Great is thy faithfulness

Father is the name Jesus taught his disciples to use in prayer to God.  Jesus himself used the name, Abba, which is the way young children would address their father(s).

When his closest friends (disciples, a word meaning those who were learning from Him) asked him to teach them to pray he spoke the words of the prayer, which all his followers still use.  Those, who have been adopted into the kingdom of God, are his children.  John 1:10-13

Our Father, who art in heaven, hallowed be thy Name, thy kingdom come, Thy will be done, in earth as it is in heaven.  Give us this day our daily bread.  And forgive us our trespasses, As we forgive them that trespass against us.  And lead us not into temptation; But deliver us from evil: for thine is the kingdom, the power and the glory, For ever and ever. Amen.

Friend of sinners is a name of Jesus.  Jesus was unpopular with the Jewish religious leaders, because He ate with outcasts and those who did not live according to the Jewish law.  He replied that those who are well do not require a doctor.

Fountain of all goodness is an expression used in a prayer for the (British) royal family.  It follows “Almighty God”, a name beginning with A.  Fountain is used in the King James (Authorised) Version as a word for source.  The prayer may be found in the Book of Common Prayer and is used in the services of Morning and Evening Prayer.

May 2022 Pick a topic CMMC challenge

May 2022 colour Forest or dark green

A walk around Rydal Water