The first four of these books were from BorrowBox. As for my previous book review post I am working from memory, having returned all these books. The Art Fiasco was a Christmas present. While many of the links in this post are to Amazon, I urge you to support high street bookshops and libraries.

I owe you one: Love means all debts are off by Sophie Kinsella

I owe you one was a light read. A chance meeting set the scene for lots of twists and turns. I raced through it, enjoying the description of the characters and development of the plot. It was the second of Sophie Kinsella’s books I have read.

was writing in the 20th century. This book is set in the 1970s. The families in the story become neighbours. I found the characters fascinating; some of them were decidedly eccentric. All the loose ends were tied up in the best possible way. I am unsure whether the number in the title refers to one extended family and another family nearby or two nuclear families from the extended family.

In search of a name: a novel Marjoliju van Heemstra

This book read like real-life. An expectant mother researches her family history to decide whether to honour the promise she had made about naming her son.

There are a lot of medical details about her pregnancy as well as the story of her research. Events following WW2 are remembered in archived documents and by characters in the story. It is a very interesting book set in the Netherlands.

Jackie Kay’s memoir Red Dust Road has much in common with In search of a name. Jackie was adopted and decided as an adult to find her birth parents. The story is not told in chronological order. It flips from accounts retold by others of events in her childhood to her own accounts of more recent events. This could make it disjointed, but in fact it works very well. There is intercontinental  travel too. 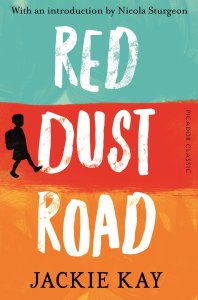 The Art Fiasco is the fifth Poppy Denby book. It is set in the North East of England and includes a historical map of Newcastle-upon-Tyne. There are two mysteries, which Poppy finds herself drawn into while on a visit to relatives. There is also some romantic interest. The status of women in the early 20th century is important in this novel and indeed in all the Poppy Denby series. There is enough background that the books may be read as stand-alone historical novels. 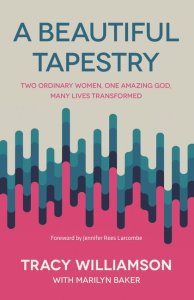 A Beautiful Tapestry by Tracy Williamson with Marilyn Baker is an encouraging, well-written book published by Authentic Media today (Thursday 13th November). I was privileged to be able to read a pdf file of it in September. (The author and I both blog on More than Writers and are members of a writers’ Facebook group.)

A Beautiful Tapestry; Two ordinary women, One amazing God, Many lives transformed is both biographical and autobiographical. It tells the story of two remarkable women, Marilyn Baker and the author, Tracy Williamson. The first two parts tell about their early lives and the time before they met. The rest of the book is about their ministry together.

In spite of losing her sight as a young child, Marilyn Baker became a very accomplished musician. Tracy Williamson is deaf and partially sighted due to a childhood illness. They both achieve more than many people, who do not have to contend with these limitations.

The emphasis is on the way God provides and guides people. There are sad stories and funny stories, notably the first meeting between Marilyn Baker and Tracy Williamson. They have travelled to other countries together, sharing Marilyn’s worship songs and Tracy’s insights gained through prayer. Some people attending their meetings have been healed.

As well as Marilyn and Tracy’s memories, other people have contributed their own recollections of the events described.

A Beautiful Tapestry would make a good Christmas present, but do read it yourself!

To find out more about Marylin and Tracy’s ministry, which has continued online during the pandemic, visit Marilyn Baker Ministries, where it is possible to listen to Marilyn’s music.

The Healing Knife Could revenge cut her free? by SL Russell was published in March 2020.

I bought this book from a local bookshop, which was able to send out books during the early stages of lockdown. It is a novel about a female heart surgeon. Although it was almost possible to guess some of the twists in the story, others were completely unexpected, including some amusing ones. The writing is good and the author draws on her experience of places to set the scene for parts of the story, which is divided into four parts rather like the acts of a play with the setting changing between each. It was a completely different story from two earlier books of hers, which I have read and reviewed. I enjoyed it.

I have met both the author and Wendy H. Jones, who interviewed her in a podcast about writing medical thrillers.

I bought Picked for a Purpose Bearing fruit through times of hardship by Mel Menzies from the author’s website. She has a special offer during the lockdown and purchasing her books is a way of supporting The Prince’s Trust. I was impressed by the speed with which the book arrived and the communications regarding its dispatch. I have read and reviewed a few earlier books by Mel Menzies. Picked for a Purpose is an autobiography with a difference. After each chapter there are questions about the reader’s response to various issues, raised through events in the story. These can be helpful in finding new ways to approach the difficulties in our own lives and perhaps letting go of damaging or hurtful things from the past. Then there is a reflection on how the Bible helps in a specific relevant manner. The analogy of a Christian life being like a plant is carried through the book with chapter headings and Bible verses.

I found the book particularly interesting as some of the places were familiar to me. I had even attended one of the same schools as the author, but some time later!

In spite of (or perhaps because of) some very difficult times in her life, Mel Menzies’ aim is to comfort others with the comfort she has received. This is a book, which has the potential to help readers understand themselves better and to give them hope no matter what problems they are facing in life. I intend to reread it to consider more deeply some of the questions with respect to my own life.