One day when we were returning from a walk, hubby went on ahead while I made a detour to take some photos of wild flowers. (I have been a regular participant in #wildflowerhour on Twitter for a couple of years.)

I found that the sandstone paving outside the church was very slippery. (It has since been cleaned.) I managed to cross it without mishap and found more flowers. Then I found several pavement plants, so I kept stopping and crouching down, putting my phone in my pocket and getting it out again. It had become warmer (or I had with all that exercise) so my gloves were also in a pocket.

I turned a busy corner and was in the next street to home, when I checked my pockets and found I only had one glove. I was tired. I couldn’t remember when I had last had two gloves. Instead of turning back and retracing my steps I went home.

Hubby had bought the leather gloves for me and they were identical to another pair. I looked in a drawer and found that I had one good glove and one which was falling apart. Fortunately the good glove was for the same hand as the lost glove.

I kept quiet about the lost glove until the next day.

When he asked, ‘Where are we going for our walk today?’ I replied, ‘The reverse of yesterday’s walk, because I lost a glove.’

I found my glove on top of a wall not far round the busy corner. We didn’t need to visit the church grounds.

Meanwhile I had realised that I could repair the glove, which was falling apart. I used some adhesive hemming tape as the leather had pulled away from the stitching and there was nothing left to sew. I also used a small piece of fabric on the inside of the double-sided tape. The fabric was some I had kept after I had shortened a skirt. It was a fiddly job. I took photos as I went along and discovered how difficult it is to take snaps of one’s own hand. 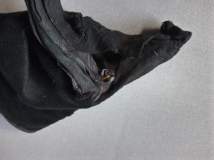 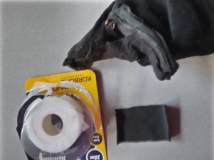 It is another example of ‘make do and mend’ rather than throw something out. I have sorted my gloves out into an everyday pair and a better pair.

One thought on “Adventures with gloves”