At the beginning of the year I chose the word Trust and wrote a post about my reasons and goals.

In July I revisited the word and wrote an update about my progress.

So as the end of the year approaches how am I getting on?

There have been times when I have failed completely to trust God. Other times I have been really encouraged about the way things have worked out.

A notable example was when I began to make plans to travel and include attending the ACW Writers’ Day in London. I had decided on dates to travel, but not booked my train tickets. Then I changed my mind. I realised that I didn’t need to go. The trip would have been for my benefit and not for that of my Mum, with whom I would stay. I would miss a number of events near home for the sake of a single event in London.

I went to our cathedral (on the same day as the writers’ day) for a choral workshop and a festival service with presentations of awards, including one to a member of our church choir. On the Sunday morning I sang in the choir at the confirmation service in the parish church. In the afternoon hubby and I went to a piano recital at a theatre in our local area. It was probably the busiest weekend of the year so far!

Then a few weeks later I made the trip south and found that it was entirely for Mum’s benefit. We had a really enjoyable time with her friends and activities at her church. I had seen some of my own friends on earlier visits. 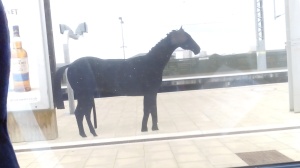 Seen from the train

I was also blessed on my journeys. My journey south was on the day of a storm, which affected transport on my route later in the day. (The trains were running normally when I passed the affected area.) I had to change trains in 13 minutes according to the timetable. The train I was on was running late. I didn’t panic, but waited patiently for the lift in order to change platforms. My next train was due to leave in 2 minutes as I boarded it. In fact I think it waited a little longer for other passengers from the delayed train. My return journey was on time all the way. (This is a journey which takes at least 8 hours in total with 3 trains.)

Other ways in which I have behaved differently include stepping down from a rota, where there seems to be no shortage of volunteers, in order to have more energy for music and for my other activities.

I wonder which word I should choose for 2018.  The second lesson of St Peter Chapter 1 verse 5-7 has a list of qualities which should be added to faith. The books of poetry tell us that the fear of the Lord is the beginning of wisdom. Micah tells us to act justly, love mercy and walk humbly with our God.