There is a summer flower show here every August. I usually find something to enter. In spite of torrential rain I ventured out and entered some photos and a child’s knitted garment. Most of the photos I entered had appeared on my blog, Sue’s words and pictures or on Twitter.  My photos were printed off at home on 6”x4” photographic paper.  One of them won a second prize in a category, which turned out not to be popular.  There were only two entries!

I am posting a photo of the cardigan and the photos with the name of the category in which they were entered. The lambs were in the category Animal offspring, but the caption is from an earlier post on this blog. 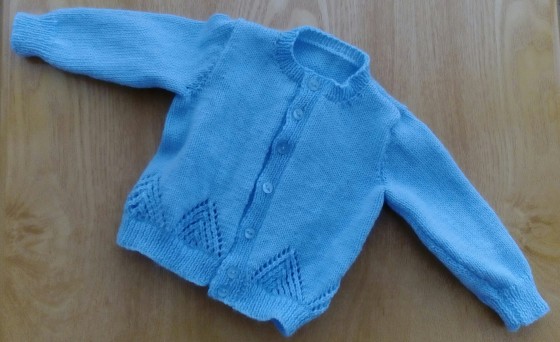 The cardigan was knitted using Robin Bonny Babe 4 ply yarn.  The pattern was from Lister-Lee and had two pattern repeats.  I decided that a boy’s garment would be better with only one.  This modification was time-saving.  I bought loose buttons from a local shop, where the assistant was very helpful.

The show was very well organised.  There was a friendly atmosphere with local people and holidaymakers attending.  Exhibitors ranged in age from 2 years to over 80.  I enjoyed tea with a group of friends.

Near and far (Derwentwater)

Click on a photo to begin a slide show. Esc to exit. Which photo do you think won a prize?  Which is the best photo?