Our village has very few events in August compared with other months.  One traditional event is the Flower Show.  I organised my holiday so that I’d be back in time for it.

The day before the show I managed to complete a knitted item to exhibit.  It was identical to one I wrote about earlier – a pink and white matinee jacket.

Entries have to be made within two time slots – the previous evening and before judging on the day.  I chose the morning and found very little space and lots of lovely knitting.

I had also taken a plant to enter in the cactus or succulent in a pot class.  This was on the opposite side of the hall from the knitting.  There were three other entries already.  I put mine on the end and turned its best aspect to the front.  My plant (and its pot) dwarfed the others.  My chances of a prize looked hopeful. 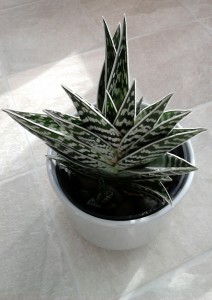 In the afternoon I arrived earlier than I sometimes do.  On the way in I bought some tickets for the prize draw.  The lady selling them told me that someone had gone to fetch my prize.  It was for the plant – and it was the 1st prize!  (That covered the cost of the raffle tickets I had just bought.)

Almost as an afterthought I bought a strip of tickets for another raffle, where the prizes were a selection of fruit and one of vegetables.

Then I proceeded round the exhibits on my own, stopping to talk to friends and acquaintances.  Several members of the craft group had won prizes.

Having completed the circuit I joined the queue for refreshments.  Not being in the habit of eating between meals, I usually just have a cup of tea.  This time the cakes were too tempting.  Two pieces of cake and a scone over-faced me.  I wrapped a large slice of chocolate in a paper napkin and put it in my bag.

One of my friends from craft group had joined me at the table and we went and looked at some of the exhibits together.  I found it far more interesting having someone to share opinions with.  It made me more observant.

For instance, one jar of jam had a slice of orange visible like a wheel inside the glass.  My friend knew that it was a WI recipe.

The prize-giving included some amusing remarks.  Then the raffles were drawn.  One of my tickets won the vegetables for me.

After the raffle it was time to pack away my exhibits.

A strange thing happened as I was on my way to pick up my prize-winning aloe variegata.  I greeted a lady with the same Christian name as mine.  She told me that the lady by her side shared my surname.  We chatted briefly about the places that my husband’s family is associated with.

Hubby was waiting for me in the car.  I could not have carried the plant home even without a box of vegetables.  It contained potatoes, a swede, enough cherry tomatoes to fill a cereal bowl, a leek, two large onions, two big red onions, a Savoy cabbage, a small cauliflower, carrots and a pear shaped item I believe to be a squash.

The weather was fine, but the day was tinged with sadness due to other recent events in the village.  However this is a good community, where people comfort and support one another.  It was an enjoyable day.

5 thoughts on “The Flower Show”